From James A. Michener's "Chesapeake", Copyrighted in 1978 by Random House, Inc., Chapter 22, "The Waterman": (An excerpted conversation between the cook, Big Jimbo and the crew aboard the Skipjack, Jessie T. as she prepared for her maiden trip to dredge for "arsters" in Maryland's Choptank River). eaters.' the galley. A She-Stew is the traditional one: Eight oysters per person boiled slightly in their own liquor, then in milk thickened with flour, flavored with celery, salt and pepper. A great opening course, but not a meal for a working man. A He-Stew is quite different, as Big Jimbo prepared his version. First he took a mess a bacon and fried it crisp. As it sizzled he chopped eight large onions and two hefty stalks of celery. Deftly he wisked the bacon out, tossing the vegetables into the hot oil to saute. Soon he withdrew them, placing them with the bacon. Then he tossed the forty eight oysters into the pan, browning them just enough to implant the flavor, then he quickly poured in the liquor from the oysters and allowed them to cook until their gills wrinkled. Next Big Jimbo did two things that made his stew unforgettable. Taking a small pinch of tapioca powder, he tossed it into the oysters and liquor and in a few minutes the finely ground tapioca powder had expanded it into a large translucent, gelatinous mass. When he was satisfied he poured the oysters into the milk, which he had already brought to a simmer, tossed in the vegetables, then crumbled the bacon between his fingers, throwing it on top. The sturdy dish was almost ready. Finally, Big Jimbo dusted the top of the stew with Saffron, giving it a golden richness, which he augmented with a half-pound of butter at the last moment. When the crew dug in, they found one of the richest, tastiest "Arster" stews a marine cook had ever devised. 'Do we eat this good every day?' and Big Jimbo replied. 'You brings me the materials, and I brings you the dishes.' 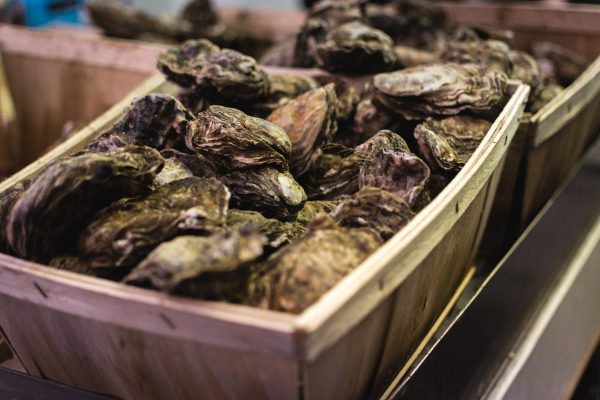